Scobey Pushes Record To 6-3 With Wins Over Nashua, WP 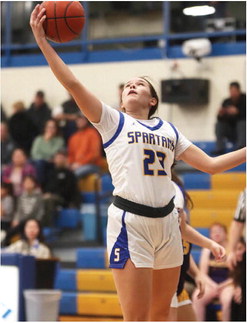 The two-victory weekend set gives the Scobey varsity girls’ basketball team a 3-1 conference record, with only the top-ranked North Country Mavericks being better at 5-0.

The Lady Spartans raced out of the 6 p.m. starting gate against Nashua and never looked back in a 5714 victory.

The locals used the long ball to set the tone.

Opheim senior Carrie Taylor, the lone senior on the team, knocked down a trio of 3-point field goals and freshman Kennadi Cromwell hit another in the opening eight minutes of play. Sophomore Kaytie Aanstad chipped in with a field goal and freshman Camrie Holum two free throws as Scobey took a 16-4 lead into the second quarter.

The advantage grew from there as Cromwell remained hot from the outside by knocking down two more treys in the second quarter for a 34-7 halftime advantage in an eventual 57-14 win.