Newspapers Were In Nearly Every Town In Montana 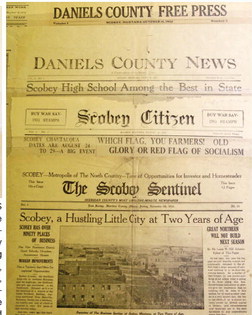 Back in the late stages of the Montana Territory (1864-1889) and when the State of Montana was in its early-developmental years (1889-1915) newspapers were springing up in most every newborn town across the Big Sky Country.

The initial wave of these start-ups was due to the Homestead Act of 1862 passed by the U.S Congress granting 160 acres of contiguous federal land to any U.S. citizen 21 years or older. If the homesteader lived on the land for five years and improved it by building a house and producing a crop, those 160 acres would be absolutely free. The intention was the westward expansion of the country and getting U.S. citizens to settle in the west. The homesteaders needed to prove-up ownership of their new free land and getting it published in a newspaper as a public notice completed all the requirements making it official. These "final proof" public notices were extremely lucrative revenue to the many "final proof" newspapers, hence the start-up explosion of them. Between 1835 and 1900 newspapers started and folded continually in the western half of the country and it was estimated about 10,000 of them published at least a few issues before folding.

The early phase of this homestead expansion in Montana Territory took place in the southwest sector, which includes the Bitterroot, Deer Lodge, Gallatin, Madison and Prickly Pear valleys where water was plentiful due to mountain runoff.

Montana’s history with the press began in 1863 when a gent named Lewis brought the first printing press into Montana Territory at Bannack (territorial capital in 1864 during the area’s gold rush), located along Grasshopper Creek 15 miles west of what would become Dillon 18 years later. He printed three or four issues of the East Bannack News Letter in his house next to the butcher shop. The last issue said he was headed to Salt Lake City to purchase a bigger press and the East Bannack News Letter would be of a larger format when he returned. While Lewis was away gold was discovered in Alder Gulch over by Virginia City, about a 50mile straight shot to the east of Bannack and that’s where people were on the move to. The East Bannack News Letter was never printed again but the small hand-roller press, 2-feet square weighing 200 pounds, wound up in the possession of J. Allen Hosmer a few years later. He started printing the Beaverhead News never getting any traction and quickly failed. The first press to enter Montana Territory remained idle and on August 20, 1897 it was presented by W.W. "Bill" Cheeley to the Montana Historical Society in

Helena. D.W. Tilton made it to Virginia City in September 1863 and brought a small press with him. He is credited with producing the first commercial printing in Montana Territory.

Meanwhile, Virginia City, territorial capital from 1865-75, and its gold rush was where the action was as an estimated 10,000 people lived in and...