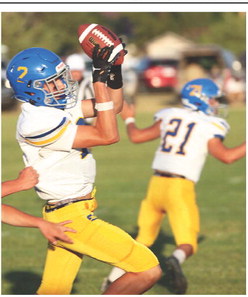 A professional football coach once said “It is only a must-win game if you face elimination.”

For the Scobey Spartans, the Saturday, October 1, 7 p.m. home game against the Circle Wildcats (Radio: KCGM 95. 7 FM) is indeed a must-win contest if they plan on competing in the upcoming Class C 8-Player playoffs beginning the weekend of October 2829. A Spartan win and they might be in providing Poplar or Plentywood doesn’t pull off a victory against Scobey in the final two weeks of the regular season. Plentywood, Circle and Scobey all currently have 2-2 conference records, creating a 3-way tie for third place (Circle owns the tie-breaker against Plentywood since it won 44-12 in week four). Culbertson and Fairview, who meet each other October 7 in Culbertson, are both 4-0 in conference play and the smart money says they will finish 1-2 in the final conference standings — in

what order who knows?

Both teams produced long, time-consuming drives on their initial possessions....