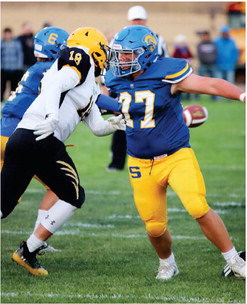 Status With Win Over MonDak

Things didn’t start out well for both offenses when the MonDak Thunder visited Scobey’s Plainsmen Field Friday night in an East C 8-Player conference matchup as both fumbled away the ball on their first possession.

By the game's end, however, it was the totalturnover count favoring the Scobey Spartans 4-to-10 in a 46-0 home-opener victory.

The Spartans, aided by a 10-yard facemasking penalty and a Taite Weltikol 10-yard pass reception for a first downs, committed its first fumble on the sixth play of the drive and the Westby-Grenora squad took possession at its own 32. It didn't last long as the Thunder, on a 1st-and-10 from Scobey’s 37-yard line, fumbled and Aanstad fell on the loose

ball at midfield. Hallock was handed the rock on three consecutive rushes for 12, 8 and 5 yards

resulting in a pair of first downs. Zakariah Traeholt, who finished with 144 rushing yards on 22 totes, took the next two handoffs and scored, giving the Spartans a 6-0 lead at the 5:46 mark.

After forcing MonDak into a three-plays-and-punt, which was returned 22 yards by Boen Tande to the Thunder's 25-yard line, Scobey marched down to the 12-yard line and looked as though it was on the verge of adding another six points to its tally. It didn't happen as the Spartans lost five yards and turned the ball over on downs.