Scobey’s Wolfe 3 Strokes Away From Playoff, 4 From State Title 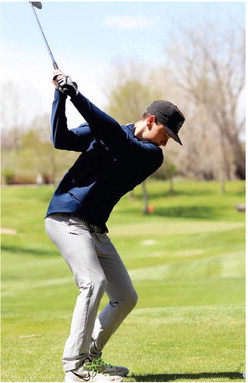 Ari Nicholas of the Seeley-Swan Blackhawks set the pace and Braxton Wolfe of the Scobey Spartans could not catch him.

However, the rest of the field of 57 could not catch Wolfe, who as a sophomore earned the runnersup distinction at the 2022 State C

Held on the 18-hole Sidney Country Club course on Tuesday and Wednesday of last week (May 17-18), Nicholas, a junior homeschooled student allowed to play this season, took the first-day lead with a 9-overpar 81. Wolfe was sitting in second with an 11-over 83 while Cooper Zimmer of Broadus and Dillon Warren of Great Falls Central shot 85 and 86 respectively. The four were grouped together for Wednesday's final 18-hole round and teed off on the 345-yard No. 1 at 9 a.m.

Check that, Windy Wednesday's final round!

Nicholas - with a last name like that how could he lose? - expanded his lead to 3 strokes two holes in but Wolfe brought it back to 2 on No. 4 when parring the 481-yard hole. On No. 6, another par-5 hole, Nicholas caught a bird and Wolfe a bogey, ...