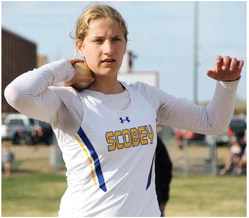 If their performances at three meets last week are any indication, the Scobey High School track and field teams are likely headed into post-season action with

The combined District 3C/2B Meet is scheduled for Saturday, May 14, at Scottie Field in Glasgow as is the East C Divisional Meet on Thursday, May 19. The State Meet is May 26-28 at Memorial Field in Great

Some of the highlights for the Scobey girls included: sophomore Mia Handran placing second in the 400-meter dash; freshman Mya Green second in the 3200-meter run; Carrie Taylor third in the javelin; Mady Willis third in the 100-meter hurdles and fourth in the 300 hurdles.

The Lady Spartans shined bright in the two relay races, winning the 4x400 with just under 3 seconds separating them and the runnersup Savage Warriors. It’s a very young squad with Kinsey Anderson and Handran being sophomores and Green and Willis freshmen. Anderson, Handran and Willis were joined by senior Karys Lamb on the 4x100 relay team placing third in 53.69, a mere 1.33 seconds behind the winning Havre Blue Ponies!

A few of the top finishers for the boys were: senior J.P.

Braut winning the pole vault at 13 feet with fellow senior Devon Southland in third at 12-6; junior Zak Traeholt second in the 200, trailing winner Brayden Kimberling of Havre by a mere 15 onehundredths of a second; senior Josh Hammerly placing

fifth in the shot put.

Included in the boxscores are all first-place finishers and all the results of the Scobey and Lustre Christian athletes who competed: