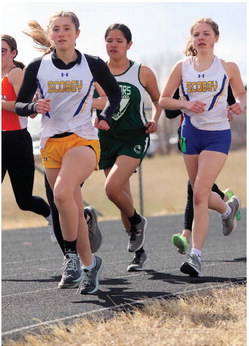 In the girls’ division the Plentywood Wildcats piled up 192 points for the team victory with the Savage Warriors in second with 110 and Scobey third with 106, edging the host Glasgow Scotties by four points.

On the boys’ side, the Havre Blue Ponies with 214 points, Malta Mustangs 162 and Glasgow 158 tallied just over half of the available scoring. Plentywood (92), Lustre Christian Lions (82) and Scobey (78) also scored well to place 4th, 5th and 6th.

Individually, the top finisher for the Lady Spar tans was distance runner Mya Green. The freshman captured first place in the 3,200-meter run in 12:37.93, which was 25 seconds faster than runnersup Samantha Wisher of the Whitewater Penguins.

Sophomore Mia Handran was also a runnersup by posting a 1:05.51 in the 400-meter dash, Savage sophomore Brooke Reuter

The top finisher for the Scobey boys was the quartet of seniors J.P. Braut and Reagan Machart, junior Zak Traeholt and sophomore Gage Hallock. In the 4x100 relay they placed first in 46.64 seconds, 1.15 seconds faster than the Class A Havre Blue Ponies. Next was Hallock, a sophomore, who placed second in the long jump at 18 feet and 6.5 inches, only four inches behind Cameron Brusven of Plentywood.

The weather was manageable but not exactly prime-time conditions. It was 38 degrees at the 9 a.m. start, warmed to 49 but still a little windy at 1 p.m. and topped out at 53 at the meet’s end.

The first field event at Schillinger Field starts at 10 a.m. and the initial track event at 10:30 a.m.

Here are the results of the Glasgow Invite’s top six finishers who scored points for their teams and of the other Scobey and Lustre Christian athletes who competed: