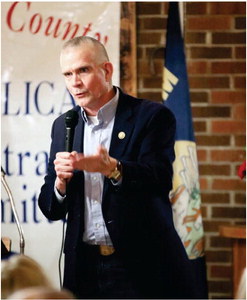 It has been quite a while since Scobey last conducted a Lincoln-Reagan Dinner but that non-activity streak has been broken.

On Sunday, February 20, around 100 people took in the latest version of the Lin coln-Reagan Dinner at the Scobey Saddle Club. It was sponsored by the Daniels County Republican Central Committee with DuWayne Wilson as its chairman. The social hour began at 5 p.m. with musical entertainment provided by local artists Logan and Kimberly Olson of Flaxville.

John Brenden was the Master of Ceremonies and the Pledge of Allegience was led by Nancy Lund.