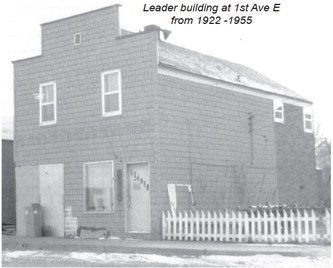 If the editor-printer of the Flaxville Democrat newspaper hadn’t gone on a drinking binge and never showed up again for work, the Daniels County Leader might not be owned and operated these days by the third generation of the Bowler family.

Burley Bowler originally was a journeyman watchmaker who served his apprenticeship as a youth in the Canadian province of Ontario, coming west to Saskatchewan in 1909. He first visited Scobey in 1913 with the idea of setting up a jewelry business but plans did not work out. He was in Whitetail in 1914 and in 1915 he had a watchmaking bench at the Pooler Drug Store in Flaxville and was helping out at the Flaxville Democrat newspaper in his spare time.

Then occurred the binge, and someone had to step in and get the newspaper out. Thus and there began Bowler’s colorful newspapering career, which he entered into by accident.

It’s no accident, however, the Daniels County Leader is celebrating its centennial this third week of February 2022. A mere ninety-eight of those years has been in the Bowler family.

After his stint with the Democrat, Bowler later was editor and/or manager or worked for the Daleview Courier, Flaxville Hustler, Madoc Recorder, Plentywood Pioneer Press and Williston Herald. He owned the Antelope Independent from 1917-19.

He was working in the Scobey Sentinel composing department when the newspaper’s editor had been directed by one of the board of directors to publish an editorial involving the school, which did a boomerang and the editor left town. Bowler, who was born in Dundalk, Ontario, was put in as editor. In 1924, however, in a disagreement over policy, he left the Sentinel, borrowed a thousand dollars from the Citizens State Bank in Scobey and purchased the Daniels County Leader.

The Leader was started in 1922 by Carl Spurrier, who had made an attempt to grow the

Whitetail Courier, but it was shortlived. The Leader became a continuation of the Courier, so it says in the masthead of the Thursday, November 9, 1922 Leader, which was Volume 1, Number 40. It is the oldest known Leader currently in this newspaper’s archives.

In 1923 the Leader was purchased by Joe Dolan and, as mentioned, sold it to

It was on Tuesday, July

Located in the white, two-story building that currently sits between the Richardson Theatre and the Southland Construction/ Flatland Furniture building on 1st Avenue East in Scobey, the Leader office was fire-bombed by associates of Pat Wallace and Charley “Red Flag” Taylor, the editors of the Producers News weekly newspaper in Plentywood, which became a voice for the Communist Party of the United States of America (CPUSA).

The act of burglary and arson occurred at 3 a.m. and the damage to the plant was considerable. The Leader was printed at the Wolf

Point Herald plant for six weeks until new printing equipment had arrived and the Scobey plant could be put back into shape.

Strangely, no one was ever brought to justice for this crime, or even charged with its commission.

In 1927 Bowler purchased the Scobey Sentinel, the city's first newspaper

and consolidated it with the Leader. The Sentinel had earlier taken over the Scobey Citizen, which was started in 1914 by George Cooke of Plentywood. The Daniels County Leader was the only newspaper in Scobey from 1927 to 1934, until the late Montana Governor Frank Cooney financed the start of the Daniels County Free Press. It ceased publication in 1941.

Burley’s oldest son, Larry Bowler, assumed the duties of Editor of the

Leader in 1945 while Burley continued his role as publisher ( Burley’s other son, Duane Bowler, was a long-time managing editor of the Billings Gazette). In the spring of 1940 Larry moved to New England, North Dakota to work for the Hettinger County Herald newspaper and in the spring of 1942 mo...