With Win Streak Now Over, Boys Look To Start Another 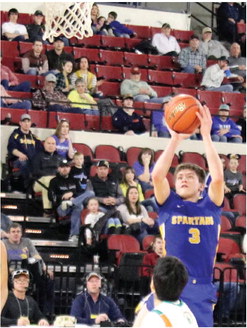 Back To Square One

What began on Friday, March 8, 2019 at MetraPark Arena in Billings during the 70th annual Class C Boys’ State Tournament came to an end on Tuesday, December 21, 2021 at Lustre Christian High School, approximately 34 miles to the southwest of

Scobey as the jump shots fly. Scobey High School's varsity boys’ hoop team had finally met its match in the Lions Den, a 7-0 undefeat- ed squad prior to the 7:38 p.m. tip-off which won 47- 33 with this starting lineup: sophomore Cayden Klatt

The leading scorer on a per-game basis during those 57 contests was Aidan Fishell with 22 followed by: Handran 13, P. Cromwell 7, B. Cromwell 5, Reagan Machart 5, J. Tande 5, Booth 1, Gage Hallock 1, Jeremy Handy 1 and Kjos 1 (this adds up to 62 because there was one game with three leading scorers for the Spartans and one contest with two).

There have been 28 total players involved in the 57game run, seven managers and one very reliable offi cial bookkeeper named Cliff Hames.

Here are the condensed 57 boxscores from The Streak: