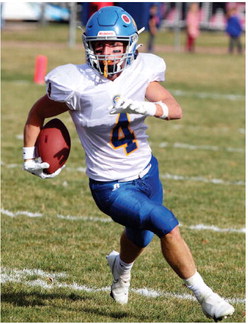 The quarterfinal playoff football game between the Scobey Spartans and host Park City Panthers Saturday, November 6, was a close contest in many statistical ways but the bottom line was the host tallied five

touchdowns and the visitor

In front of an audience somewhere in the 400-500 range, perhaps even a little bit more as many Scobey ex-pats from the Billings area showed up, the Panthers found a way to get through an extremely emotional

On All Saints Day, Mon-

Six days prior he collapsed on the football field during practice. As of game day there was still no cause of death reported.

So it was an extremely mentally tough week for the Park City community as a whole but Hoffman’s teammates, all two dozen of them, still knew they had to go out and win it for Jed, number 17 in the 4-page, game-day program. Both the Panthers and Spartans wore black and red number 17 stickers on their helmets.

As noted, statistically, the 12-point final margin being the exception, things were pretty much even.

Each team punted just once, with both kicks covering 21 yards. Each had only one penalty, a facemasking call on the home team and a roughing the kicker on the Spartans. Third-down, fourth-down and point after touchdown conversions were all in the same neighborhood.