Sub-Conference Lead Up For Grabs Saturday In Culbertson 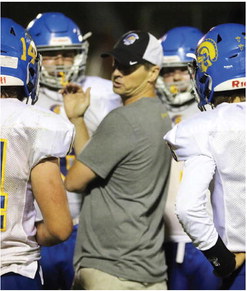 What was the key while playing under the lights of Plentywood’s Lincoln Field?

A dominating defensive effort in the first half!

The Wildcats rushed the ball 13 times in the first 24 minutes for only 9 yards, which is an average of just over two feet per carry. On five of those totes six different Spartans were in on a tackle for lost yardage.

Junior defensive back Boen Tande started it on Plentywood’s third play of the contest for a one-yard loss. On the very next play seniors Josh Hammerly and Colter Oie and sophomore Gage Hallock dropped the ball carrier for a 2-yard loss and the Wildcats punted one play later.

On their next defensive series the Spartans used a Hallock tackle for loss creating a 2nd-and-11 from Plentywood’s 35, with junior Owen Fishell intercepting a long pass on the next play.

On the Wildcats’ third offensive possession starting early in the second quarter, senior Cole Taylor produced back-to-back tackles for loss on first down (-3 yards) and second down (-1) and one incomplete pass later Plentywood punted for the second time.

On the Cats’ fourth drive senior Gage Southland dropped a ball carrier for a 5-yard loss making it 3rdand- 15 from Plentywood’s 10-yard line forcing a punt.

While all that was occurring the Wildcats went 0-for-6 in the passing department to have just 9 total offensive yards and 2 first downs at halftime. Meanwhile, the Spartans (3-0, 128-35, 42.6-11.6) scored touchdowns on 2-of-6 possessions in the first half and converted on both for a 16-0 advantage at the half.

After being forced to punt on 4th-and-7 from its own 35-yard line on its initial possession, Scobey fashioned a...