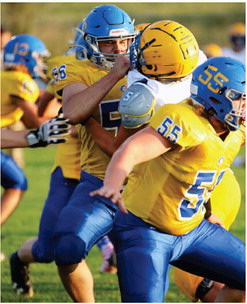 Not including the much-

more-obvious final score of 56-20 over the Fairview Warriors, the most important statistic posted by the Scobey Spartans in their second victory of this young prep football season was

Played Friday, September 3, under the lights of Scobey’s Plainsmen Field, the Spartans’ average yardline beginning of their 10 possessions was Fairview’s

Fairview’s average start of its 11 possessions was its own 18-yard line.

That’s an average difference of 29 yards in possession starting points!

It’s not a usual statistic but it played a huge role in Friday’s victory.

Scobey did the same thing on the ensuing possession, advancing on two Zach Turner pass receptions worth 8 and 26 yards, a 14yard rush by Colter Oie and a 10-yard scamper by quarter Boen Tande before stalling at the Fairview 6 for a

The Warriors couldn’t take advantage and fumbled two plays into the possession, with Tande recovering the ball at Fairview’s 16 with 35 seconds left in the firs...