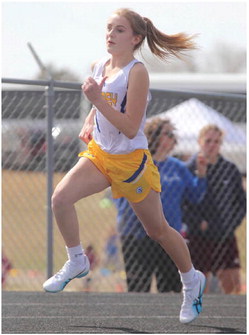 After taking a week off from meet action due to the Fairview Invitational being postponed on April 16, the Scobey High School track and field teams were back in action last week at the Sidney Invitational.

The theme appeared to be the Class A teams were hogging around half of the total points available, which is 527.

The Plentywood girls (52, 2nd) and Hinsdale girls (38, 6th) showed well while the Scobey gals finished in 9th with 34 points.

Senior Gracee Lekvold won the battle of the Spartans in the 800-meter run in 2:29.06, less than a second in front of runnersup Ashlyn Lutts (2:29.68), a junior with the Baker Spartans.

Freshman Mia Handran also found herself in the top spot by winning the 400-meter dash in 1:05.02.

For the boys, Opheim High School junior Cole Taylor was the highest fin isher for Scobey when placing second in the 3,200-meter run. He covered the 8-lapper in a personal-record 10:59.13, which was 11.64 seconds behind winner Ben Archer of Sidney.

Speaking of personal records, the Spartans established 42 new ones following the gathering in Sidney, with the girls getting 23 of them and the boys 19.

This week’s schedule has the Scobey and Opheim kids traveling to Glendive on Saturday, May 1, for the 61st annual Elks Meet. It is set to be held on the Oakland Athletic Complex at Perham Field, with the first field event starting at 10 a.m. and initial track event at 11 a.m.

Like last week in Sidney there will be plenty of competition from the larger Class A schools. Of the 19team field eight are in the A classification (Billings Central, Glendive, Hardin, Havre, Lockwood, Lewistown, Miles City, Sidney). Class B will be represented by Baker while Class C has Ekalaka, Circle, Custer-Hysham, Nashua, Plevna, Richey-Lambert, Savage, Scobey and Wibaux competing. The lone out-of-state squad will be Richardton-Taylor from neighboring North Dakota. The following week, on Tuesday, May 4, some of the Scobey athletes will be fortunate to compete in the 38th annual Top Ten Meet at Scottie Field in Glasgow, with start time at 3 p.m.

Here are the results of the top six who scored p...