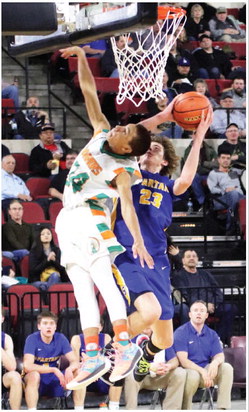 At 54 And Hopefully Growing!

What exactly does a 54game winning streak in high school basketball look like?

Glad you asked because we have the answer, or, shall it be said, the answers.

What began on Friday, March 8, 2019 at Metra-Park Arena in Billings during the 70th annual Class C Boys’ State Tournament is still alive and well for the Scobey High School varsity team. It will remain active until at least the conclusion of the 2021-22 season opener in December of this year or January of next, depending on when the Montana High School Association (MHSA) says it is go-time.

The 54 straight victories by the Spartans match the 54 consecutive won by the Class B Choteau Bulldogs, whose streak lasted from 2014-16. The all-class record in MHSA history for the boys is 56 in a row from 1962-65 by Missoula County, which now goes by the name Missoula Sentinel Spartans.

To reiterate what was written in the March 18, 2021 issue of the Leader: The 2021-22 Scobey boys’ basketball schedule will be the most anticipated in the history of the program (and all Scobey sports)!

Other than just saying the Spartans have won 54 in a row over the course of three separate seasons, a deeper dive was certainly due.

The leading scorer on a per-game basis during those 54 contests is Aidan Fishell with 22 followed by Handran at 13, P. Cromwell 7, B. Cromwell 5, J. Tande 5, Reagan Machart 3, Booth 1, Jeremy Handy 1 and Kjos 1 (this adds up to 58 because there was one game where there were three leading scorers for the Spartans and one contest with two).

There have been 23 total players involved in the 54-game run, six managers and one very reliable official bookkeeper named Cliff Hames.

Here are the condensed 54 boxscores from The Streak: