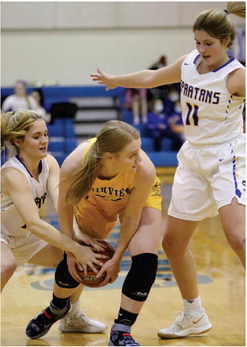 It’s the midway point of the 2020-21 girls’ basketball regular season and the Scobey Spartans have to be pleased they are trending in the right direction with a 7-game winning streak.

In fact, things seem to be going well enough the locals even earned some statewide recognition earlier this week by cracking the top 10 of the weekly 406mtsports.com poll for the first time this season, a list looking like this: top-ranked Fort Benton followed by North Country (Saco-Whitewater-Hinsdale), Melstone, Seeley-Swan, Charlo, Manhattan Christian, Belt, Roy-Winifred, Turner and at number 10 the Spartans.

Froid-Lake was a great pickup for the Spartans competition-wise but the big problem was Sydney Dethman, the Redhawks' 6-foot-2 senior center and recent signee to play college hoops with the Fresno State University Bulldogs of central California, was not in the lineup. Earlier in the week at practi...