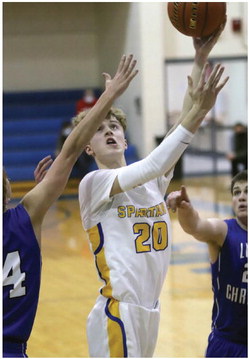 The One All Have Been Waiting For?

It’s the big rematch of the 2020 Montana Class C Boys’ Basketball State Championship Game — which was never played! — that isn’t even remotely close to being a rematch as the above paragraph explains.

Everybody knows the story. It’s the evening of Friday, March 13, 2020, a full day after Fairview earned a 44-37 victory over Fort Benton in the early State C semifinal at Dahlberg Arena in Missoula and Scobey throttled defending state champ Manhattan Christian 77-39 in the late semi. Both had Friday off and were ready to meet Saturday night for the third time in the season with the Spartans holding a 2-love advantage (52-49 in Fairview in second game of the regular season, 59-36 in East C Division Tournament championship game in Glasgow). It never happened. By the early evening hours the coronavirus had entered the state’s border and that was it. The Montana High School Association shut down the remainder of the four state tourneys following the late semifinal games, creating the co-champion reality. To its credit the MHSA could have pulled the plug right after the first semifinal games Friday night, not only in Missoula (just girls, not boys) but in Bozeman (Class AA), Billings (A) and Butte (B) as well, but did not allowing for at least a co-champion outcome.