Scobey Runners Can Be Proud Of Performance 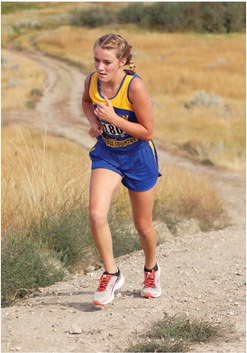 Two seasons into a rivival of the cross country program following a nearly four-decade-long absence, the Scobey Spartans have much to be proud of follow- ing their 1,046-mile round

trip out west to Kalispell to

compete in the 57th State

and Class B teams competed on Friday and the Class C and Class AA teams ran on Saturday.

The Scobey boys, with a 3-runner score of 68, placed fifth out of a dozen teams while the Scobey girls fin ished in seventh with 74

“We’ve made big gains with the program in just two seasons,” said Scobey co-head coach Jamie Green. “Our program is fun for the kids who enjoy doing it. I’m excited about the upcoming years. Hopefully we have three junior high boys coming up next season. We’ve heard from a couple of kids who want to do it.”

The Spartans, along with the entire field of all classi - fications amounting to 915 competitors (473 girls, 442 boys) had to compete on a course with snow, which was plowed in some spots but was still slick in most of the way, which seemed to add about 2 minutes to most everybody’s time.

When the Class C and AA competitors ...