couple of steps past his …. 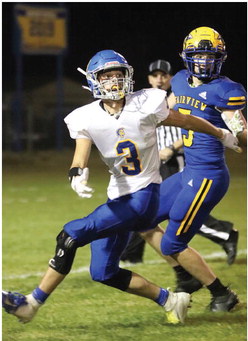 couple of steps past his defender

on a fly pattern along the north

sideline and Tande’s long arching bomb was right on the mark without Handran breaking stride.

NOTE: It says the drive was 47 yards but the TD pass covered 59 yards, which was a result of a 10-yard holding penalty on the Spartans.

1 first down, 1:42 time of pos session. HUGE PLAY: A blocked punt by Zach Turner gave Scobey possession at Fairview’s 24-yard line with 23 seconds left in the third quarter and was perhaps the turning point of the ent...