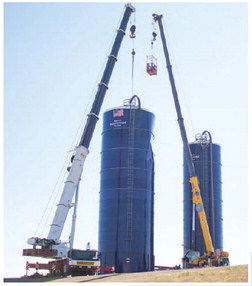 blue silos have stood over the Fladager property near Peerless. The smaller of the two, standing at 60 feet, was

erected in 1968 when Milton Fladager stuffed it full of silage and fed cattle in his feedlot. Milton’s sons were excited about the success they had witnessed due to the first silo and urged Milton to

build the second, which was

Unfortunately, due to global events beyond Milton’s control, including double- digit interest rates and bottom of the barrel calf prices, it was soon evident that the silo would never pay for itself. As the 70's problems turned into the 80's drought, the silos went from being productive, silage-storing towers to landmarks.

When in production, it has been reported that the larger silo could hold 400 tons of

with the smaller silo's 100

tons. These structures are made from steel with bakedon glass to produce an oxygen- limiting environment that was marketed to improve ...